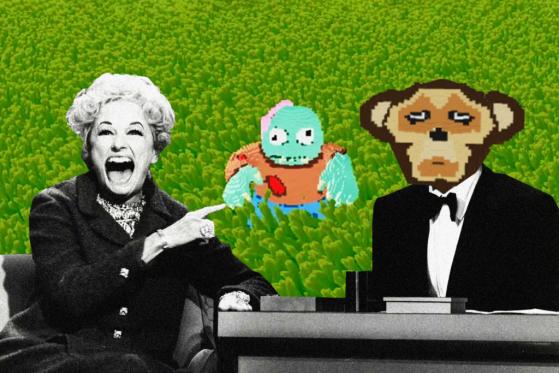 Pixelmon is an NFT-metaverse game which raised $70 million through from supporters. It was alleged to be a Pokémon-like metaverse game, yet, during the reveal, hopeful players were left diappointed as Pixelmon revealed horrible art and poor overall game quality. Some even began suspecting that the whole project was a scam.

Pixelmon is sold out! After many months of hard work the team is so excited for the many opportunities that $70M will provide for the game and for holders.We now have everything we need to build one of the biggest games in the NFT space. It’s time to get to work.

The grand promises made by the project of building “one of the biggest games in the NFT space” were left seemingly unfulfilled, as Pixelmon NFTs that were initially worth 3 ETH are now selling for 0.4 ETH.

Holders of Pixelmon NFTs began sharing their disappointment with their audiences, as the NFTs clearly did not look the way they were supposed to.

People who bought Pixelmon for 3 ETH when they could have just gone on upwork and hired the artists for $100.Theses massive hype cycles for NFT projects can’t be good in the long run and the health of the ecosystem. pic.twitter.com/Qa65HZ0RJE

$70M Pixelmon reveal. Absolutely beautiful.They even promised an additional $2M to improve the art even further.Apparently they are promising a further $5M in spend to build out the game.That’s a full 10% of the $70M allocated to building.Very ethical & I’m bullish. pic.twitter.com/xX28v7PDhO

Pixelmon had an art reveal so terrible, ‘Kevin’ is being labeled a historical NFT pic.twitter.com/A2ummGDypV

“The Pixelmon reveal was unacceptable. This is what our Pixelmon look like in-game. Our NFT art failed to reflect this,” Founder of Pixelmon Syber said, addressing the concerns. According to some sources, pseudonymous Syber is a 19-year old New Zealander, or a 21-year old named Martin.

He then added that the team had failed to accomplish many things and had limited knowledge in vital areas:

Our journey has just begun and we will work hard to earn back the trust of the community no matter how long it takes,” the project founder finished, rounding out the apology in his Twitter (NYSE:) post.

Users criticized the company for an incompetent allocation of funds and of betraying the trust of buyers; the founder then disclosed that the company would be pledging $2 million to redesign the current NFTs that people had already bought.

One NFT collector shared a particularly irresponsible tweet by Pixelmon’s founder featuring financial advice which encourages traders not to do any research and to blindly invest in the supposedly blue-chip Pixelmon project.

Statements such as this are misleading and can have legal consequences. Please be transparent and release financial documents detailing where the funds have been allocated to as well as to confirm that proper tax measures are being taken. pic.twitter.com/J3NQa82YOk

Join to get the flipside of crypto

Upgrade your inbox and get our DailyCoin editors’ picks 1x a week delivered straight to your inbox.

Disclaimer: Fusion Media would like to remind you that the data contained in this website is not necessarily real-time nor accurate. All CFDs (stocks, indexes, futures) and Forex prices are not provided by exchanges but rather by market makers, and so prices may not be accurate and may differ from the actual market price, meaning prices are indicative and not appropriate for trading purposes. Therefore Fusion Media doesn`t bear any responsibility for any trading losses you might incur as a result of using this data.

Fusion Media or anyone involved with Fusion Media will not accept any liability for loss or damage as a result of reliance on the information including data, quotes, charts and buy/sell signals contained within this website. Please be fully informed regarding the risks and costs associated with trading the financial markets, it is one of the riskiest investment forms possible.