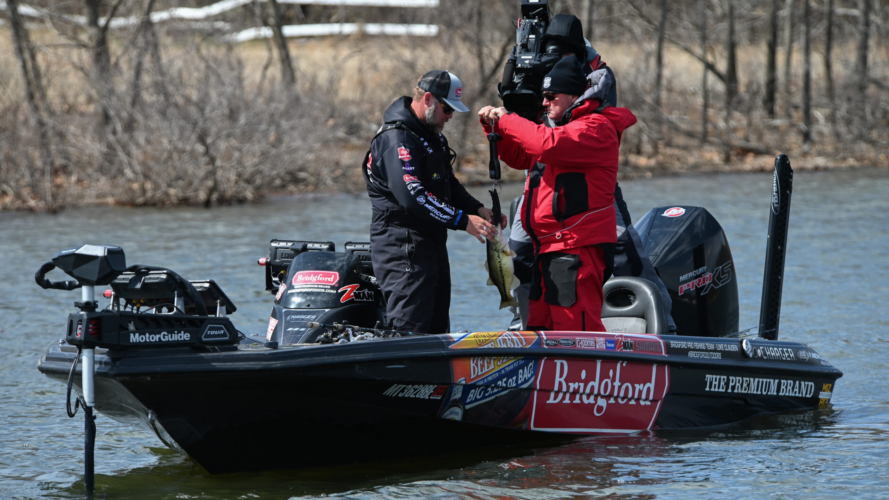 TULSA, Okla. – Bass Pro Tour angler Luke Clausen of Spokane, Washington, weighed nine scorable bass totaling 24 pounds even to win Knockout Round 1 of REDCREST 2022 presented by Costa, the Bass Pro Tour championship, on Grand Lake O’ the Cherokees. The five-day event, hosted by Tulsa Regional Tourism, features anglers competing for a total purse of $730,000, including a top cash prize of $300,000 to the winner.

Also advancing along with Clausen to Sunday’s Championship Round of competition are pros Andy Montgomery of Blacksburg, South Carolina; Edwin Evers of Talala, Oklahoma; Bryan Thrift of Shelby, North Carolina; and Zack Birge of Blanchard, Oklahoma.

“I went out there today not knowing if I might zero or I might catch them all day long,” Clausen said. “Right now this lake is changing so much – these fronts come through, the water is coming up, it’s changing colors everywhere across the lake. The key is figuring out how to catch them, right now, by the minute.

Hometown favorite Edwin Evers of Talala, who led the first day of competition, was disappointed with his performance but still happy to be advancing to the Championship Round.

“Man, I didn’t drink that much coffee today but I felt like I was jerking my jerkbait away from every fish out there,” the Oklahoma pro said. “I needed to slow down, and I just didn’t get it done today. But we’re moving on to the Championship Round, so it was enough. It just wasn’t like I was hoping it would be.

“Today with the water coming up, it threw me off a little bit,” Evers said. “I’ve been really nervous about the water rising – I need the fish to stay where they’re at and I don’t need them to swim up to the bank. Hopefully tonight they start pulling a little bit of water and we can get it down a bit.

Fellow Okie Zack Birge of Blanchard also made the cut but was definitely feeling the pressure of SCORETRACKER® as time ticked down.

“It was a stressful day to say the least – I’m still shaking from the last 20 minutes,” Birge said. “Every time my official would make a noise I’d turn around and be like ‘just don’t give me an update, please…’ But it was enough and I’m really happy to move on to the Championship Round.

“The key for me today was just trying to move around and stay with the cleaner water,” Birge said. “If I got in the dirty water, I didn’t get many bites. But I’m throwing something I’m confident in and keeping it in places that I’m confident in getting bit. Hopefully we’ve saved our best day for the last day.”

The full field of anglers competed in the two-day Qualifying Round on Days 1 (Wednesday) and 2 (Thursday) of the event. The field was cut to just the Top 20 based on two-day total cumulative weight. The remaining 20 anglers were split into two groups – 10 (Knockout Round 1) competed on Day 3 (Friday) and 10 (Knockout Round 2) will compete on Day 4 (Saturday). The top five anglers from each group based on total single-day weight will advance to the Championship Round, the fifth and final day of competition (Sunday) where weights are zeroed and the angler that catches the highest total weight on the final day will be crowned the REDCREST 2022 champion and earn the top prize of $300,000.

The top five pros from Knockout Round 1 that made the cut and will advance to Championship Sunday on Grand Lake are:

The five pros eliminated from competition Friday are:

Full results can be found at MajorLeagueFishing.com.

Overall, there were 44 scorable bass weighing 123 pounds, 6 ounces caught by the 10 pros Friday.

Shryock earned Friday’s Berkley Big Bass Award, weighing in a 6-pound, 7-ounce largemouth in Period 1 to win the $1,000 prize. Berkley awards $1,000 to the angler that weighs the biggest bass each day, and a $1,000 bonus to the angler who weighs the largest bass of the tournament.

The 10 anglers that will compete in Knockout Round 2 on Saturday are:

The General Tire Take Off Ceremony will begin each day at 6:45 a.m. at the Wolf Creek Park and Boating Facility, located at 963 N. 16th St. in Grove, Oklahoma. Anglers will depart daily at 7:30 a.m. from the park and return after competition ends at 4 p.m. Fans are welcome to attend all launch events and also encouraged to follow the event online throughout the day on the MLF NOW! live stream and SCORETRACKER® coverage at MajorLeagueFishing.com.

REDCREST 2022 Presented by Costa at Grand Lake O’ the Cherokees features anglers competing with a 2-pound minimum weight requirement for a bass to be deemed scorable. Minimum weights are determined individually for each competition waters that the Bass Pro Tour visits, based on the productivity, bass population and anticipated average size of fish in each fishery.

The 2021 Bass Pro Tour featured a field of 80 of the top professional anglers in the world competing across seven regular-season tournaments around the country. The Top 41 anglers in the Angler of the Year standings after the seven events qualified to compete in REDCREST 2022 Presented by Costa.

The MLF NOW! broadcast team of Chad McKee, Marty Stone and J.T. Kenney will break down the extended action on all five days of competition from 7:45 a.m. to 4:30 p.m. MLF NOW!  will be live streamed on MajorLeagueFishing.com and the MyOutdoorTV (MOTV) app.

Television coverage of REDCREST 2022 Presented by Costa will be showcased across two two-hour episodes, premiering at 7 a.m. ET, July 2 and July 9 on the Discovery Channel. A one-hour special episode of MLF REDCREST 2022 Presented by Costa will premiere at 2 p.m. ET, Sunday, July 17 on CBS. New MLF episodes premiere each Saturday morning on the Discovery Channel, with additional re-airings on the Outdoor Channel. Each two-hour long reality-based episode goes in-depth to break down each day of competition.