Soul Food Restaurants In Florida: Where To Find The Best Southern Food – The News Herald

Food so good it goes beyond hearty, reaching toward the soul. It’s soul food, and Florida restaurants have some of the best takes on the uniquely southern cuisine.

A traditional meal — whether at a holiday gathering, at home, or even drive-thru — is colorful, flavorful, and might include: fried or baked chicken; beef tips; fried or smothered porkchops; collards, mustards, or turnip greens (usually flavored with smoked meat); field peas, such as black-eyed peas; cornbread; yams; oxtails and gravy; rice; and stewed or fried okra.

Grab a few napkins now and later a blanket.

Here are 10 soul food restaurants that deserve a first try — or second helping — while traveling across the state.

When crafting the menu at Big John’s Eatery in suburban West Palm Beach, John and Sasha LeJeune took inspiration from their own home kitchen, where Sasha’s comfort cooking earned a following among friends and family. The menu’s star attraction is her weekend oxtail and grits, a hefty bowl that combines creamy white grits and slow-braised oxtail. A touch of oxtail pan gravy and a sprinkling of chopped scallions brings the dish together.

It was that dish that sparked the soul food diner’s present brunch-all-day concept. Customers would come in during the week, clamoring for the dish and other Sunday brunch favorites. Open since September 2020, Big John’s Eatery also reflects the flavors of Sasha’s Panamanian roots and John’s Haitian heritage. In vintage South Florida style, their soul food carries echoes of the Caribbean.

As NFL Hall of Famer Deion Sanders put it in Time magazine in 2018, this is “some of the best soul food I’ve ever had. It’s a must every time I go back home.” Fort Myers’ oldest restaurant, Farmers Market has been crafting slow-braised collard greens, meatloaf, fried chicken and sweet potato pies for 70 years thanks to cooks and servers who have been there for almost as many decades. Those pies are Christine Yelling’s handiwork, and sweet potato is just her beginning; pecan, apple, peanut butter, lemon meringue and seasonal berry pies round out her extensive repertoire.

If you’re more savory than sweet, Mark David Anderson serves as Farmers Market’s pit master, smoking ribs and juicy shreds of pulled pork laced with charred bits of bark. Many of the restaurant’s classic recipes — the ham hocks, the smothered chicken, the stuffed bell peppers — come from the late Olivia Williams. Miss Libby, as her many regulars knew her, shaped this kitchen from 1976 until her death in 2019 at the age of 87. But her soul lives on.

Sarasotans who are serious about soul food follow the truck owned and operated by Chef G. Established in 2009, G’s Southern Mobile Kitchen is where you’ll find Gordon Gregory making his collard green egg rolls, myriad flavored “Kitchen wings” and other favorites such as his fried pork chop or chicken sandwich, as well as the equally addictive “Greedy fries.”

Additional popular items on the food truck menu include a fried fish or shrimp plate and sides such as mac-and-cheese, collard greens with turkey, candied sweet potatoes, saffron rice and fried okra.

While typically found in Sarasota and Manatee counties, G’s Southern Mobile Kitchen recently set up in the Osceola County city of Kissimmee and informed Facebook followers that they’re: “Testing our products in other markets for expansion. When we come back to Sarasota hope to see you in the front of the line.”

Its menu features barbecue jackfruit – a popular non-meat alternative to pulled pork due to its similar flavor and texture when cooked – as well as a fried chicken wrap made with oyster mushrooms and side dishes such as vegan mac-and-cheese and sweet potato fries. Other offerings include vegan versions of a Cuban sandwich, burger and meatloaf.

Want more soul food? These are the 6 Bay County restaurants to enjoy 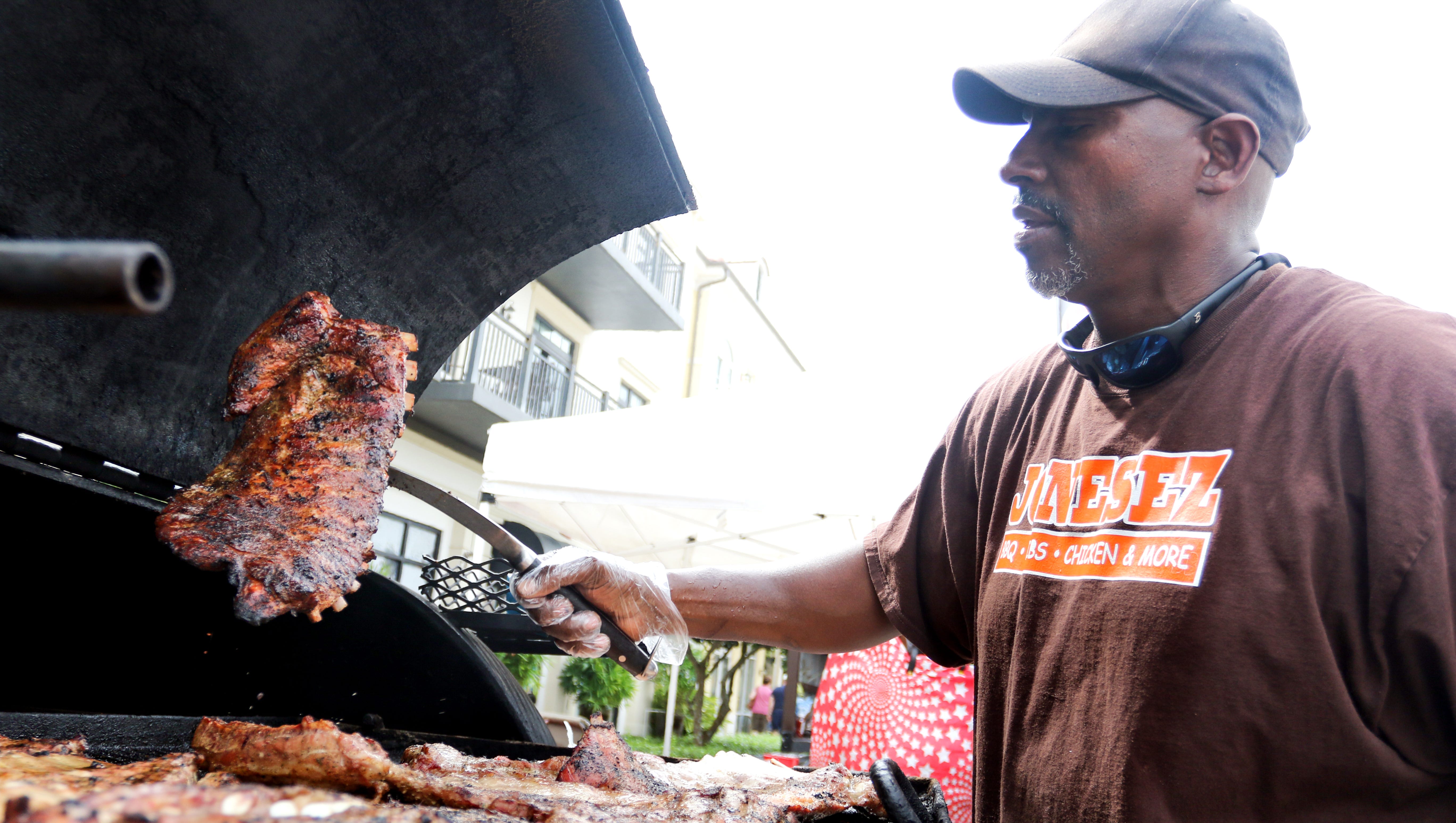 While Andre Jones is the pit master of this 15-year-old family operation, the one who’s slow smoking the pulled pork, the spare ribs, the chicken, it’s his wife, Vickie, who’s become the heart and soul of the ever-expanding Jonesez empire.

It’s her macaroni and cheese folks fawn over, her cornbread, greens and potato salad, too. Her scratch-made sides combined with his slow-smoked barbecue have grown this place from a single location to a trio of smoke-scented food trucks roaming Lee and Hendry counties, and a new takeout-only facility on Palm Beach Boulevard in Fort Myers. That’s a lot of Jonesez, but Southwest Floridians can’t seem to get enough.

On any given day, you will find Josiah’s owner Sharolyn Gaines multi-tasking at her restaurant. But on every day, those tasks will include creating her signature dish, fried pork chops. It’s almost a ritual how she conjures up a closely held secret recipe for the batter with which she then coats the custom-cut chops. After being submerged in oil for the perfect amount of time, the meat emerges golden and properly crispy – creating the kind of bite that southern folks take personally.

Gaines pairs her protein with cornbread, rice and gravy, and a choice of another side. Most popular proteins on Josiah’s menu behind porkchops is oxtails, then fried fish. Sides often include macaroni and cheese, yams, corn, and collard greens. When asked what makes her food different, Gaines said, “I want to serve food the way I grew up — the old-fashioned way. I want to give my customers a touch of being at home.”

That roadside stand, which became today’s brick-and-mortar eatery in 2017, kicked off Spann’s family legacy plan. Not only does the chef pay homage to his parents in his daily dishes, the father of three dreams of expanding the brand and eventually bequeathing each of his children a restaurant.

Spann describes his barbecue style as “a hybrid of Texas and Memphis style” with Deep South flavors. “It’s a true Southern-style barbecue. Ours is not just salt-and-pepper barbecue, but just a well-seasoned product. The seasoning’s on point. It doesn’t need sauce, though you can add it,” says Spann, whose top seller is the pork spare ribs.

Few things will test your patience more than the line of diners at the Soul Food Bistro. There is always a line of people waiting for their turn to step up to the cafeteria-style serving line and load up a plate with smothered pork chops, fried chicken gizzards or oxtails, with heaping sides of collard greens, carrots and the truly remarkable macaroni and cheese, and the smells of the dishes wafting to the back of the line will have your stomach growling like an angry tiger by the time it’s your turn to place an order.

Be sure to save room for dessert – the hummingbird cake and the sweet potato pie are not to be missed. The Lenox Avenue location is huge – 5,800 square feet, though half of the dining room is closed due to the pandemic – and part of a former shopping mall now operated by the Potter’s House church. A second location opened in 2019 in a former Outback Steakhouse location near Jacksonville’s Regency Mall.

The rotating weekly menu features entrees such as a vegan meatloaf and beef stew, along with dishes such as vegan mac-and-cheese and cauliflower casserole and other cuisines like Moroccan, Caribbean and Indian.

The cool Orlando breeze gives a gentle reminder that it is a balmy, sun-splashed Florida winter.

Then comes the grub.

For years, my wife Rolanda and I, both Georgia born and raised, have searched for a place in Central Florida that offered something comparable to the soul food we were accustomed to in Augusta. Outside of Miami, we may have found one of the best so far in The Licking, with two locations in the town that Mickey built.

Co-owned by DJ Khalid and billed as “Soul Food to the Stars,” The Licking and has seen its share of hip hop stars pass through, including the Migos, dropping by, adding to the casual flavor.

We enjoyed the vibe, listening to the music and people watching at the Millenia Mall location. The food is pure, #blackjoy.

We watched, eyes wide open as the waitress – who was very conversational and had very good insight on the menu – brought out a round of perfectly seasoned, fried turkey wings along with sides of vibrant-looking collard greens, perfectly cooked veggie rice and macaroni and cheese. The waitress also brought out fried broccoli — an alternative for those hoping to escape the meat trap of fried wings.

The taste was ecstasy, a vivid trip that took us back to grandmother’s busy Sunday kitchen, where the smells and seasonings were almost as spiritual as any visit to church.

But this was not grandmother’s kitchen, with its bubbling brown gravies, stewed meats and vegetables swimming in hog fat. No, the Licking takes the best of Soul Food’s past but with a firm grip on 21st Century tastes.

Pork — once a solid staple in soul food — has been expertly replaced with smoked turkey.

But in a hat tip to Florida’s own African-American/Caribbean cultural flavors, there is fried lobster, snapper, conch, pigeon peas and rice, along with grits. There are also Red Velvet waffles and soul food versions of chicken-stuffed egg rolls. But it’s the turkey wings for me.